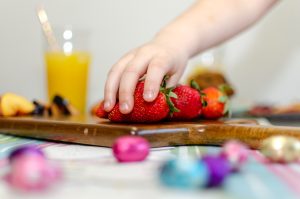 One of the most stressful times as a new parent is when you spend your very last bit of energy making a meal for your toddler and they immediately start throwing it on the floor. Or even worse, they throw it at you. Mine just learned the word “yucky”. I don’t even know where he heard it. We can all worry about picky toddlers until pigs fly, but when kids start food throwing, you feel like that has to stop immediately.

Yet, whenever we asked him to stop, he started laughing. The more angry we got, the happier he was! 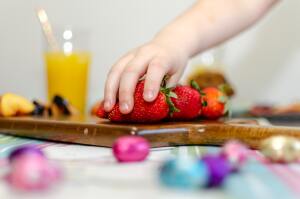 Toddler about to throw food

We learned that we had to ignore it. Sometimes, like with his cup, we just sat it back in front of him and asked him to drink it. We put down a composable plastic tablecloth on the floor under his high chair to catch the food. Eventually, he stopped throwing.

Those of you who are regular readers know that we have had an ongoing problem for the last 5 months with food throwing. Birch just loves to sling his oatmeal, dump his juice, flick his bacon to the netherlands and in general, cause a complete mess at mealtime. Papa Tree and I have spent endless hours vacuuming, spot cleaning and cleaning crevices out with toothpicks. Looking for some help, I reached out for Ellyn Satter’s book on eating. She recommended removing the child from his highchair as soon as he started throwing food. Then if he seemed hungry, to put him back in it within a few minutes. Our pediatrician said the exact same thing. He said that a child throws food because they are usually done eating.  He recommended not reacting either.  After 1 month of trying that, it still hasn’t seemed to work consistently. I wonder if we are reacting and we aren’t conscious of it.

Here we are on vacation at my parents and he seems to have calmed down a bit quite a bit. I pondered whether he liked his highchair out here better (it has a cushy lining and a reclining feature that his basic Ikea chair does not). Then I thought it was the company- a dog and a grandmother for an audience, the timing, the food selection….  I wanted to see what other people were saying out there on the internet.

In the end, I really think we are still reacting to his food throwing in a way that is interesting to him, and also I think it is timing: I take him in for breakfast earlier and also timing in his maturity.  He is just getting older. Oh, please let this continue when we get home! Here is hoping that some of you have had better luck, don’t have this experience, or can offer some other suggestions to those of us with oatmeal stuck on our clothes. (you can tell who we are!)

Oh, by the way, anyone else out there experience the “white diet”? (yogurt, cheese, milk, bread) We just got over that one!

This is my theory.

Toddlers Throwing Food is a Phase, An Awful, Awful Phase

Some people from the The Berkeley Parents Network  agree:

My now 20 month old went through the same thing, I think I even
posted about it.  It also drove me completely nuts, but I
learned (or somebody here told me!) to not make a big deal out
of it when it happens.  For one, he’s learning about gravity and
cause and effect, so it’s completely normal behavior.  For
another, he’s also learning how to ”test” you, so if he sees
that his behavior is getting a reaction out of you, it will only
make him more likely to do it again so that he can get another
reaction out of you.

My advice is: this is a phase, and don’t pay too much attention
to it.  When he throws food, gently say, ”I guess you’re not
hungry, so meal time is over!” and take him down from his seat.
Try not to worry about whether he is still hungry.  Believe me,
if he’s hungry he’ll eat once he understands the connection
between throwing food and being removed from his seat.  It’s
hard to remember that he is not doing this with the intention of
manipulating you and making you angry; it’s just a very fun game
with delightful results from his point of view (wow, I can make
mommy yell and get red in the face and hey, this bowl makes a
wonderful crashing sound on the floor!).  He is still a baby,
and he is experimenting.  Gently show him that meal time is for
eating, and if he’s not going to eat then he can’t be in his
chair.  Good luck.  Six months from now, you might even forget
that this phase happened!
Been There

Are You Raising Picky Eaters

Recipe for a “Lil’ Foodie”: Tips for Creating a Healthy Eater For Life!

5 Ways To Keep Your Baby Sleeping When You Need